Bombirds are enemies in Monkey Quest.

Bombirds are common flying enemies in the Chim Foo and Crossroads trails of Ook. They also make an appearance in the Pirate Deckhand Trail. Bombirds attack by dropping damaging watermelons on the player, and their main defense is their capability of flight, making them harder to target. Due to the fact that Bombirds must be directly above a monkey to attack, it is suggested that you use a ranged weapon such as a Slingshot or Mystic Flytrap Staff to take them out. Also, the large elite Bombirds drop two watermelons at once instead of one, which is both harder to avoid, and potentially more damaging.

Bombirds look like birds with masks and disproportionately large toucan-like beaks. Their colors may vary. Much like Rachnoids and Spinefish, Bombirds lack the elemental variations typical for shadow monsters, but have four unique variants instead.

The smallest of the Bombirds is the Weak Bombird, which is green with yellow claws and beak. They are exclusive to Crossroads and drop only one watermelon, whereas most other Bombirds drop two.

Two other Bombirds appear nearly identical to each other and can only be distinguished by subtle differences in the color of their plumage. One appears in Crossroads trails and can be recognized by the dark green color of its feathers. Another blue Bombird with a teal-colored head appears in the three earlier Chim Foo trails. Both have red beaks and claws, as well as orange feathers at the sides of their heads. The only location that features both of these Bombirds is the Pirate Deckhand Trail, possibly by accident.

These different types of Bombirds are rarely named in the game, and when they are, it is done inconsistently. The quest 'The Bombird's Rage' in the Lost Fortress refers to the bigger orange and yellow Bombirds as Elite Bombirds. In Suzu's Daily Quest, they are even called Magma Bombirds, despite the clear dissimilarity to magma monsters.

In the files, the different Bombird types are named Weak Bombird, Bombird, Large Bombird, and Bombird Warrior. The regular Bombird is likely the green one. It is also depicted in badges and Bombird Armor. While the regular (green) and Large (blue) Bombird are rather unintuitively of the same size, this terminology does allow for them to be treated analogously to other natural enemies with similar variety (namely Rachnoids and Spinefish), which color-based terminology does not. 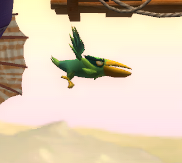