Foulbreath the Troll is the main antagonist of the Ice Raiders storyline quests. He is a servant of Ka. He was sealed off in the Icewind Caverns by some powerful monkeys, but Dingy, the Guardian Knights who betrayed his battlemates, released him in the quest The Final Seal. He now lurks in the Tempest Chasm.

Foulbreath possesses many standard evil qualities, such as ambition for spreading chaos across Ook and having the world belong to Ka, his master. Foulbreath also seems to have a strange acceptance of defeat and faith in his master, claiming that even though he is defeated, Ka will still rise. Ka also seems to have a disliking for the Monkey King and how the monkeys worship him so much, stating that "Your precious Monkey King won't be able to save you this time!" Foulbreath also bears a strong desire to be free and serve his master, as he states "Finally, I am free! No one can stop us!"

Foulbreath appears as a gigantic frost troll with icicle-looking horns and frosted armor over his body, which protects him greatly in combat. His fists represent giant Wolverine-looking frost claws that can crush any uncareful monkey. Without his frost armor, Foulbreath resembles a giant ape-looking monster.

Foulbreath makes one appearance in the quest, Foulbreath the Troll, for a boss battle in the Tempest Chasm that ends the Ice Raiders storyline quests.

Foulbreath has many abilities in the boss fight. His primary ability is to smash the ground in front of him, dealing damage in that area and causing several icicles to fall from the ceiling, also dealing damage. He also laughs every time he uses his primary attack. Foulbreath's second ability is to blow icy breath in front of him, blowing you to the left. This can be a damaging ability because if you allow yourself to be blown away, you will be forced into a wall with spikes, dealing damage to your monkey. Foulbreath also possesses a strong set of frost armor that protects him from any incoming damage, making the fight harder for you. Once his armor is destroyed, he will become much more vulnerable to damage. Once he is in low health, he will enter a state of rage and deal more damage. He will use his primary attack more often and he will laugh less often, allowing him to smash the ground more often. Your screen will also be slightly clouded with frost, a result of his anger.

Foulbreath - "Finally, I am free! No one can stop us. The world will soon belong to Ka!"

Enzo - "Time to throw a monkey wrench into Ka's plans!"

Foulbreath - "You may have stopped me for now, but you cannot stop Ka's return. Your precious Monkey King won't be able to save you this time!" 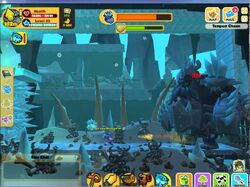 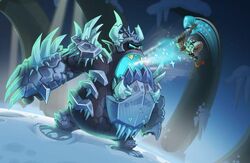 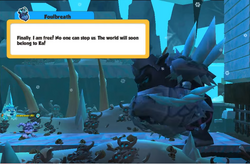 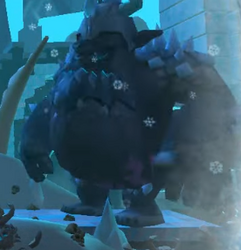 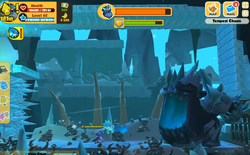 Add a photo to this gallery
Retrieved from "https://monkeyquest.fandom.com/wiki/Foulbreath?oldid=30727"
Community content is available under CC-BY-SA unless otherwise noted.