Loch is an archaeologist who resides in The Underbelly in Clock Tower Square. He is also found in The Floating Isles.

He is also seen in Clock Tower Square in The Underbelly, as he states. But he has no quests for you, as they got removed. But when he did have quests for you, it was mainly about searching for Idols in trails and putting them together. At the end of the questline, you are sent to the Forgotten Temple where you find a Light Shard, which is used to craft a Monkey King item, as he states. 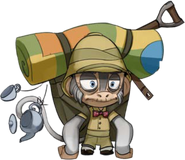