Unlike other masters, he is a snake. Due to the Chim Foo's limiting view on sentient creatures that aren't monkeys, it is exceedingly rare for there to be a high-ranking member of the Chim Foo tribe that isn't one. 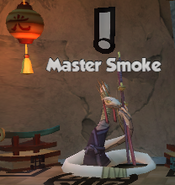