The Mek-Tek is a tribe located in the south-east on Fire Canyon Highway. The other 4 tribes are the Sea Dragons, Ootu Mystics, Chim Foo, and Ice Raiders. Not much is known about the Mek-Tek because it is not a tribe that can be joined, although there were concept levels for the tribe here The surroundings of the concept levels likely suggests that there was little plant life in the tribe, since it's around a volcano, and that the Mek-Teks were very advanced at architecture, since their structures seems quiet modern. Its name is likely derived from the words Mechanical and Technician.

The Mek-Tek is known for their teamwork and cooperation. Because of their teamwork, the Mek Teks built the clock tower. Wijit and The Twins are the only known Mek Teks in the game. Wijit and the Twins both reside in Clock Tower Square. Wijit is the diplomat of the Mek-Tek tribe.

The Mek-Tek Tribe's element is unknown, although there is a small hint in the game, that is the weapon "Horn of Heroism" from the Sea Dragons. When you use the horn, you get surounded by a shield containing 10 elemental symbols (they are in pairs), each representing a tribe element. There´s a snowflake, fire, leaf, swirl and a lightning bolt, making it a clue that Mek-Tech´s element is most likely electricity.

After the Monkey King's death, Trunket, one of the Monkey King's companions, went his own way to rebuilt part of Ook. He founded a destroyed land, southeast ofOok, which He rebuilt by using his technology skills. He named the land the Mek-Tek tribe, where monkeys learn to be great engineers. Ever since then, more and more monkeys came to learn to be great Mek-Tek engineers. But soon Trunket died. It is still currently unknown who took his place as leader. The Mek-Tek tribe was very peaceful until Ka's return woke up many dangerous and forbidden monsters. Things became even worse when a Lava Spirit came and raided their home area, Scaldera and chased fellow Mek-Tek monkeys away. 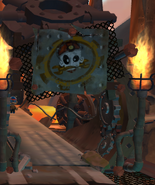 The Mek Tek logo above its entrance 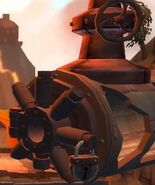 Probably the entrance to the next parts of Mek Tek