This article is a stub. You can help Monkey Quest Wiki by expanding it.
Were you looking for Cave of Legends?

Noogo Village is the first trail you enter in Monkey Quest. This trail is where the tutorial takes place.

In the beginning of Monkey Quest, new monkeys were learning the tales of the Monkey King via drawing on a wall. The player then hears an explosion off in the distance; Ka awakening and releasing a giant spider. Monkeys first encountered Enzo, who's tongue was stuck. Enzo crawls into the players hair and they become companions. Then the player meets the Mysterious Warrior, who gave the player a weapon.

Later the slingshot had to be bought in Noogo Village after receiving the wooden stick as the players first weapon. The Tough Green Leaf Armor was replaced with Oak Plank Armor.

Now, new players encounter a new adventure. They meet Enzo who by now claims to be famous in Ook. He guides them to Noogo Village where players meet the Mysterious Warrior who tells them that Ka has unleashed a new threat: Racknoch. Now that the tribes have been well discovered, the Mysterious Warrior offers players a tribal training weapon. A Training Cutlass, a Training Sword, a Training Staff, or a Training Axe. The player now has to defeat 3 Spiderlings. Later on you are assigned to find an artifact, but then you bump into Rachnok. During your battle, the Mysterious Warrior comes to the rescue and drives Rachnok away. You continue your search for the artifact which leads you into the Forgotten Temple, where you find out that the artifact was stolen!

The level starts with your monkey standing beneath trees on green grass. To begin you are going to go to the right and use the space bar to jump up onto the ledge. There are only two residents in Noogo Village, Poko and Rilan. 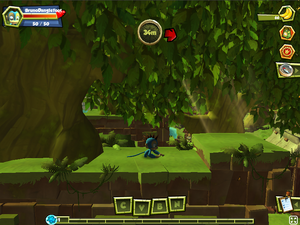 Your Chameleon friend tells you that a monkey with an exclamation point overhead means they have a quest for us! Press the ctrl key and she will tell you to take your bananas and go buy armor from the monkey Poko. After buying armor from Poko in Noogu Village you will receive 150 experience points and 10 bananas.

Accept the quest by clicking the green check mark, go to the left using your arrow and use the up arrow to cross the bridge.

Jump right again (using the space bar and right arrow) to get to the next platform. The Chameleon will help you buy armor from this vendor. 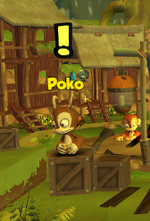 The monkey in the chair is Poko, the vendor Onko sent you to, and his armor costs bananas but it will protect you. The Tough Green Leaf Armor costs 5 bananas. To buy the armor click on the orange shopping cart icon in the pop-up box and then click the green check mark to confirm your purchase. After purchasing your shirt it goes into your inventory. Click on the backpack symbol to view your inventory and drag the 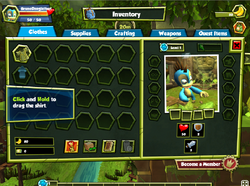 new armor to your monkey.

Return to Onko by going back to the left, you can either jump down from the ledge by walking off or go back to the rope and go down the rope. Walk to the right using your arrows and then use the down arrow to walk back across the bridge. Walk over to Onko and press the X key. 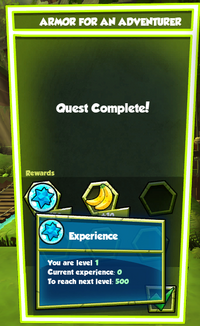 Now that you have completed that task Onko gives you another task to deliver supplies to Loch the archeologist at The Forgotten Temple. A pop-up box will appear showing you the objective for you quest and the rewards. The rewards for completing this quest will be 150 more experience points 10 more bananas and a shiny red apple, which is a healthy snack that restores your power. Click accept quest.

Next Onko tells you to go to the right and use the space bar and right arrow to jump up on the ledge. The gate on the right will open. After walking through the gate, using your right arrow there is a gray pedestal with light shining up and it is labeled Forgotten Temple, walk on top on the pedestal and press x.