The Ootu Mystics are one of the five tribes of Ook.

If you venture into the Swamps of Misery, you'd better be friends with the Ootu Mystics. They know every stump like the backs of their hands and are on good terms with many of the spirits that inhabit these shrouded glades.

The Ootu Mystics Tribe is located in the southwest region of the world of Ook. The 4 other tribes are Sea Dragons, Chim Foo, Mek Tek, and Ice Raiders. Their tribe entrance is found at Fire Canyon Highway.

There are 3 Market Places in the Ootu Mystics, which are Mystic Plaza, Cauldron Keep, and Bog Bazaar. The Enemies that are native from Ootu Mystics are Bathogs, Orchids, and Rachnoids.

The quests in the Ootu storyline are important because they teach you how to craft Stink Bombs, Potions of Shielding, and Elixirs of Life.

For reaching the Ootu Mystics tribe, Ghanee will give you the Mystic Charm, the Mystic Flytrap Staff and the Apprentice Mystic Top Hat. These can be found in your backpack.

Their ancient armor is the Venom Plate Armor.

The Ootu harness the element of Earth.

After the Monkey King sacrificed his life to defeat Ka, Mama Ootu, one of the Monkey King's companions, went on a journey to find a piece of Ook to rebuild. What she found was a land that she called the Ootu Mystics tribe. She learned to harness the element of earth at the Ootu Mystics tribe, and so did other monkeys. The tribe was peaceful until Mama Ootu died. The monkeys had no choice but to elect a new leader, and so Mama Babu took her place. The tribe regained their peace once again until Ka returned and woke up many monsters in the tribe. Because of the monsters, Mama Ootu wasn't able to rest, so now her spirit still lurks in the Deep Swamps. 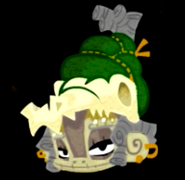 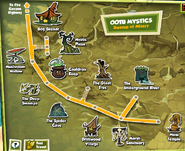